Not all viruses: Bacterial viruses against canine pyoderma

Phages for dogs too? This week, Stephanie Lynch, a PhD candidate at La Trobe University in Melbourne, Australia, tells us about her research into phages and endolysins to treat multidrug-resistant Staphylococcus pseudintermedius infections in dogs.

Also in this issue: a request for therapeutic E. coli phages, new ways prophages are running the show, why Klebsiella phage therapy may need extra caution, more info about how COVID-19 is likely impacting AMR, and more!

Urgent need for Escherichia coli phages for a patient

We are urgently seeking Escherichia coli phages for a patient suffering from recurrent ESBL E. coli sepsis in Finland.​

Beatriz Osuna (UCSF) and colleagues published two new papers this week in Cell Host & Microbe: one on how Listeria phages protect their lysogenic genomes by inducing Cas9 degradation and the other detailing how a bifunctional Listeria phage anti-CRISPR tunes its expression in response to Cas9 levels.

Derek Cerchione and colleagues at Editas Medicine in Cambridge have developed a new M13 phage-based directed-evolution strategy and a mutagenesis method called SMOOT to engineer Cas9 nuclease activity. They report the isolation of a Cas9 mutant that reduces off-target cleavage while preserving efficient editing at multiple on-target sites.

Soumyananda Chakraborti (Jagiellonian University, Poland) and collaborators from Poland, UK and Canada report the characterization of NinH, encoded by bacteriophage lambda. NinH is the first example of a phage mimic of the bacterial Nucleoid-Associated Protein Fis, and potentially influences phage excision-integration events.

Andrea Rocker (Monash University, Australia) and colleagues published a study on how Klebsiella pneumoniae outer membrane porins affect its permeability to antibiotics. They suggest caution be taken when targeting this species and other carbapenem-resistant Enterobacteriaceae with phage therapy, since exposure to phages that select for altered porin expression may increase resistance to antibiotics.

Maryn McKenna wrote a new Wired piece on how the COVID crisis may worsen the AMR crisis. Within it, she links to a useful compendium of literature on secondary infections and AMR in the context of COVID-19, which was compiled by two researchers, Issra Bulgasim and Adam Roberts, at the Liverpool School for Tropical Medicine.

Here’s a nice article on the ‘age of bacteriophage’ written by undergraduate students Muskan Gupta and Rohit Gokhale at Acharya Narendra Dev College in New Delhi. Included is some excellent phage art! This was written as part of an online training course in science writing provided by IndSciComm.

Eligo Biosciences (Paris, France) is hiring a Bacteriophage Formulation Scientist to tackle the ambitious challenges of ensuring phages and phage-derived particles can be delivered to particular microbiome sites of the human body.
Apply Here Read more about the job
Research Associate
The Seed Lab in the Department of Plant and Microbial Biology at UC Berkeley is looking to hire a staff research associate. The candidate will use genetic and biochemical approaches to evaluate how phages evolve to modulate the excision and integration of mobile genetic elements in Vibrio cholerae.

Hi I’m Prathaban Munisamy (Ph.D., Microbiology), working as Assistant Professor, in a deemed University in Tamilnadu, India. Ministry of Science and Technology, Govt of India, has called India-Portugal joint proposal of research. I would like to propose a project on Bacteriophage, for this I need a Portugal research partner jointly to apply for India-Portugal research program. Any suggestions or relevant information for the above said are highly appreciated. Email: mpmicrobial@gmail.com

Not all viruses: Bacterial viruses against canine pyoderma

With COVID-19 giving viruses a bad rep, phage researchers have taken to twitter with the hashtag #NotAllViruses, and rightfully so! Bacteriophages (phages) are good viruses and are a promising alternative therapeutic against antibiotic-resistant bacterial infections. Their future use within the veterinary sector is promising, especially against infections such as canine pyoderma.

Antibiotic resistance within the veterinary sector is an important issue

One bacterium highlighted throughout this report, and the focus of our research, is Staphylococcus pseudintermedius, which causes a range of moderate to severe infections infection in dogs, where 78% of isolates are MDR. Of these infections, canine pyoderma is a significant concern, as it is the most commonly diagnosed skin infection within small veterinary practices.

With an increase in antibiotic resistance and a parallel decline in effective antibiotics, there is an urgent requirement for alternative therapeutics, with phage therapy explored as a novel treatment option in dogs.

Did you know, the first successful trial of phage therapy in animals was conducted in 1919?

Fast forward 100 years and interest in phages has resurfaced due to the current antibiotic-resistance crisis. In 2010, Hawkins and colleagues conducted a successful phage therapy trial against Pseudomonas aeruginosa, an MDR bacterium that causes a chronic ear infection in dogs. Results showed the phage treatment reduced bacterial counts, which led to clinical improvement within 48 hours, and there we no signs of toxicity to the dogs.

With preliminary evidence of successful phage therapy in dogs, my research is focusing on phages and phage-derived products as a treatment for S. pseudintermedius infections in dogs.

The potential of phage therapy for Staphylococcus pseudintermedius

Phage therapy is an attractive option for the treatment of S. pseudintermedius infections in dogs, with a study by Moodley and colleagues already isolating four novel phages which preferentially lyse Methicillin-Resistant S. pseudintermedius (MRSP).

Additionally, as indicated by the TEM image below, we have isolated unique phages. They show narrow host ranges when tested individually, with an increase in lytic ability when combined in a phage cocktail, where they lyse 52% of S. pseudintermedius clinical isolates. Preliminary testing in vitro shows our phages significantly reduce bacterial counts within 20 minutes, with complete bacterial clearance by 2 hours. 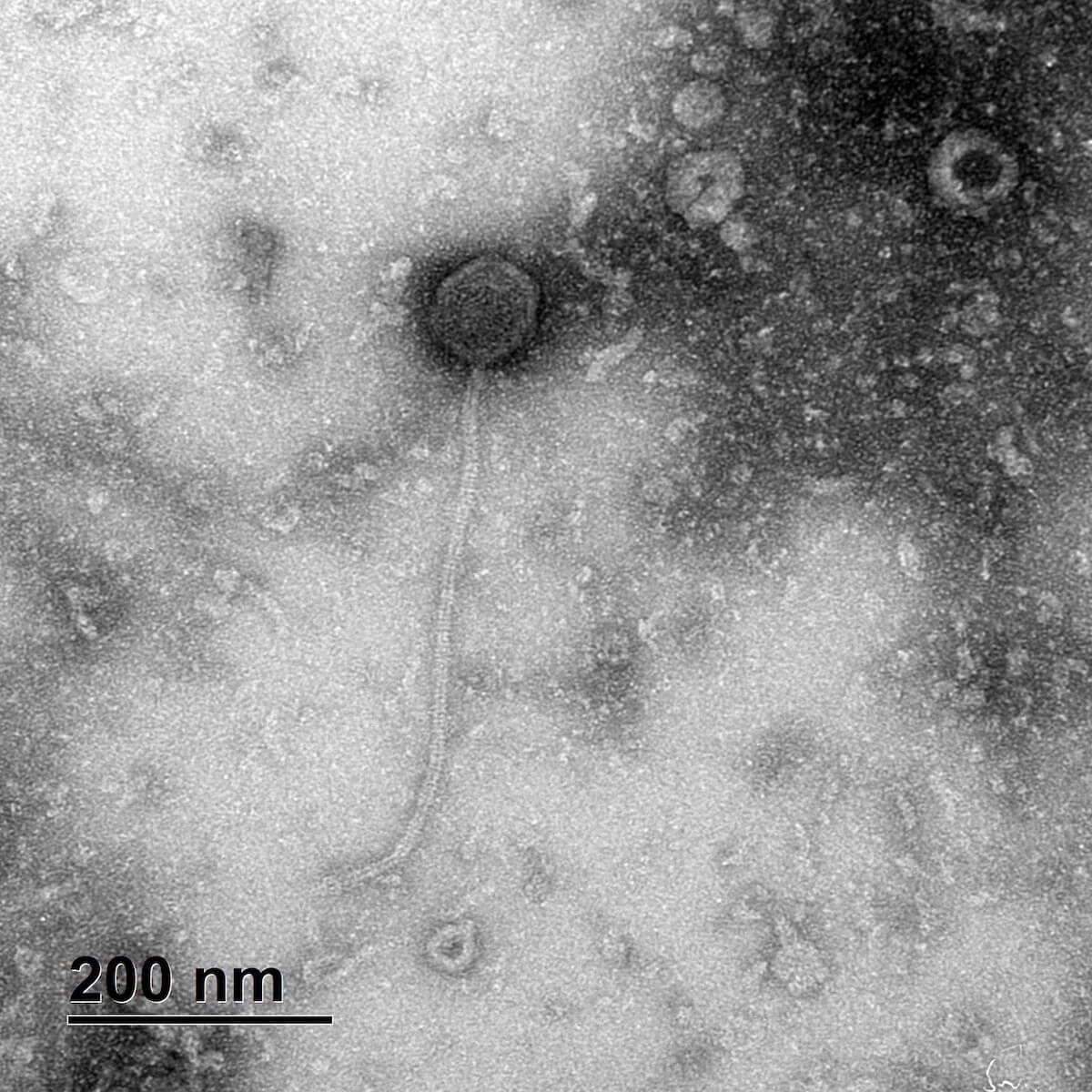 Despite this promising data, genome characterisation of ours, and of previously published phages, show genes associated with lysogeny, which is unfavourable for phage therapy. Therefore, our research now explores the potential of endolysins against S. pseudintermedius.

Endolysins are enzymes synthesised by phages at the end of their lytic lifecycle to degrade the bacterial peptidoglycan to release phage virions. Junjappa and colleagues have shown that purified endolysin treatment results in moderate clearance of Staphylococcal infections with no allergic reactions observed in dogs. Therefore, we are interested in the potential use of endolysins for S. pseudintermedius specific infections in dogs.

However, for phages or endolysins to progress to clinical trials in dogs, extensive trials in animal models are required.

Currently, mice models are used for the safety and efficacy of phage therapy trials, however, recently, there has been extensive research focused on the development of alternative animal models.

Using silkworms at the 5th instar stage, as displayed in the image below, we have shown that S. pseudintermedius can survive and replicate within the silkworm and is able to kill the silkworm in a dose-dependent manner. We have also shown that injection of our phage preparations individually shows no adverse side effects to the silkworms and is, therefore, a safe treatment option moving forward and will progress to upcoming trials in dogs. The future of phage therapy

Multi-drug resistant S. pseudintermedius is a significant threat within both veterinary and human health. The use of phages and endolysins, as well as the development of an alternative animal model, represents a significant step forward, and will set the groundwork for the progression of phage therapy into a clinical setting for the treatment of infections in dogs caused by S. pseudintermedius.

Rohit Kongari helped us produce this week’s article by helping us source and write the What’s New and Jobs sections. Thanks Rohit!!

To cite this, please use:
Lynch, S. (2020). Not all viruses: Bacterial viruses against canine pyoderma. Capsid & Tail, (72). Retrieved from https://phage.directory/capsid/canine-phage-therapy
BibTeX citation:
@article{canine-phage-therapy2020,}
RSS Feed
All diagrams and text in this issue of Capsid & Tail is licensed under Creative Commons Attribution CC-BY 4.0, unless otherwise noted.