In our PHAVES series this summer, Dr. Gina Suh, an infectious disease physician at the Mayo Clinic, and John Haverty, a phage therapy patient, spoke about phage therapy from a doctor’s and patient’s perspective. Here’s the recording, along with a recap by Rohit Kongari! 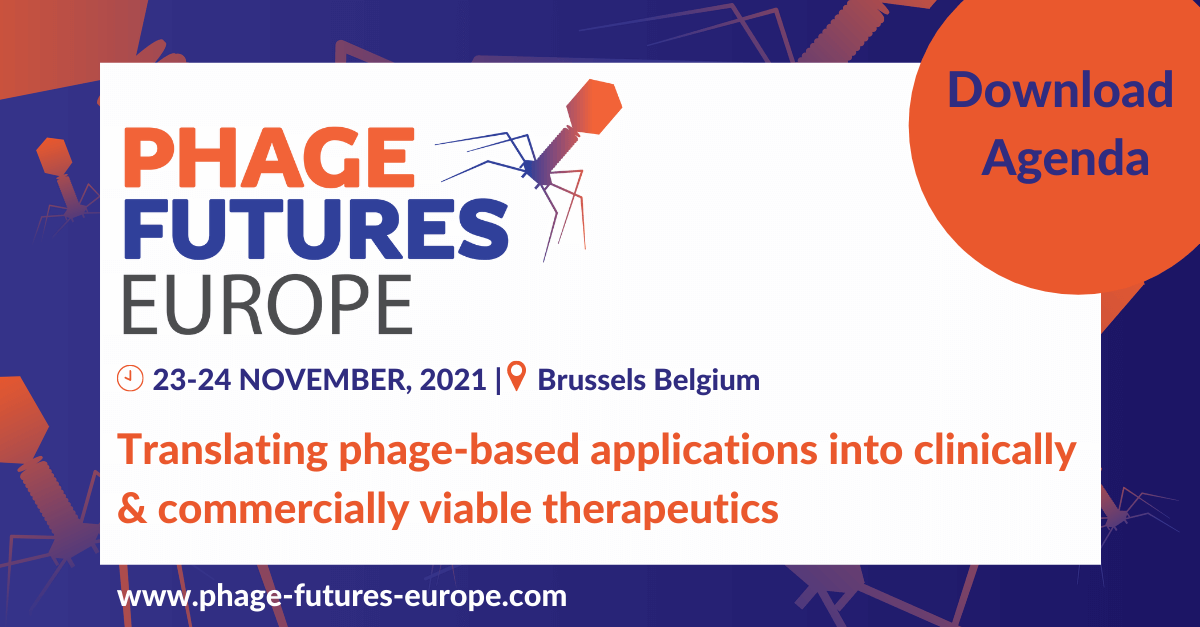 Phage Futures EU 2021 returns in-person in Brussels, Belgium on November 23-24! The theme will be ‘Translating phage-based applications into clinically and commercially viable therapeutics’.

Are you a student? Today (Oct 15) is the poster submission deadline!

The European Food Safety Authority panel published a new paper in EFSA Journal delivering a scientific opinion on the safety and efficacy of a feed additive consisting on a set of phages infecting Salmonella gallinarum (Bafasal®) for all avian species. Bafasal® is a phage-based feed additive manufactured by Proteon Pharmaceuticals to eliminate or prevent Salmonella infections in poultry.

Last chance to get your phage bioinformatics manuscript into PHAGE Journal’s special phage AI and informatics issue! If you’re working on AI in phage biology or therapy, or tools for host discovery, prediction, etc, submit your manuscript by Oct 31.

Want inspiration? The newest paper published as part of this special issue is on the INPHARED tool for identifying of biases in the collection of cultured phage genomes by Ryan Cook and colleagues.

To celebrate Phage Week (22-28 October), Phage Directory is holding a Twitter #scicomm challenge! To participate, all you need to do is create Twitter posts that align with the daily prompts (e.g. tag your favourite phage people, tag your favourite phage paper, etc.) using the hashtag #PhageWeek2021 and tagging @phagedirectory & @stephh_lynch. Follow @phagedirectory to see daily prompts!

We’ll amplify your tweets throughout the week and recognize those who answer the most prompts! Keep an eye out for more details to come!

The Ibadan Bacteriophage Research Team is celebrating World Phage Week 2021 with a webinar series on October 29 (3-5PM West African Time) and Oct 30 (1-4PM West African Time). The theme will be “Assessing the Readiness of the Global Phage Community in Combatting AMR”.

Jessica Sacher will chair the next Phage Phun session, which will be Wednesday Oct 27 at 9AM Pacific. Join us for this informal virtual networking session by registering here. (If you’re already signed up for the PHAVES series or a past Phage Phun, no need to register again; we’ll send you the link closer to the date).

Want to build leadership experience in a fun and low-key setting? If you’d like to chair a future Phage Phun (or PHAVES) event, email phagephun@phage.directory! We’ll equip you with everything you need to know, and take care of all the tech, invites and getting the word out — you just show up on the day!

Twitter call-out from Michael Laub; Question for phage tweeps: does EOP stand for ‘efficiency of plating’ or ‘efficiency of plaquing’? I’ve seen both in the literature. Am hoping this one doesn’t stoke emotions comparable to the argument about whether ‘phage’ or ‘phages’ is the plural form.

I am a Phage Biologist at heart with a strong technical background in Biochemistry, Bioinformatics, Phage Genomics, Microbiology and Molecular Biology. I worked on the role of phage spanins in host lysis for my PhD under the guidance of Dr. Ryland Young at Texas A&M University. I am currently working on understanding the host-phage interactions between Staphylococcus aureus and phage K towards use in phage therapy applications.

For Phaves 20, the Phage Directory community interacted with Dr. Gina Suh and John Haverty to learn about their phage therapy experience from the Doctor and Patient perspective. John Haverty, after undergoing 17 surgeries to treat a bacterial infection from a knee-implant surgery with little to no success, became the first patient treated in the phage therapy program at the Mayo Clinic in Rochester. He was treated with phages supplied by the company Adaptive Phage Therapeutics (APT) by Dr. Gina Suh, an infectious disease physician with expertise in musculoskeletal infectious diseases at Mayo Clinic. The work has been published as “Phage Therapy for Limb-threatening Prosthetic Knee Klebsiella pneumoniae Infection: Case Report and In Vitro Characterization of Anti-biofilm Activity” by Cano et al.

Gina and John began by giving a quick overview of the patient (John)'s medical history: a timeline of incidence of his different bacterial infections, the various medical procedures performed, antibiotic courses used and the side-effects faced due to such treatment approaches. They then discussed how the idea of treating John’s prosthetic joint infection (PJI) with phages materialized as a last resort before amputation and the experience of being the first attempt at phage therapy at Mayo Clinic.

A monophage preparation, consisting of a Klebsiella phage KpJH46f2 (isolated by Dr. Biswajit Biswas), manufactured by APT was delivered intravenously through 40 doses (6.3 e+10 phages per dose) along with a chronic suppressive minocycline course. They went on to describe the immediate and gradual changes in clinical presentation of the infection, pain, mobility, and general quality of life throughout the course of phage therapy. The effectiveness of the treatment was further substantiated with analysis of different cytokine, ESR and CRP markers for the progression of the PJI. Dr. Suh further elaborated on her perspective on the different components needed for this successful compassionate use phage therapy case, the uniqueness of John’s case, and how the approach could be adopted for other cases. They also mentioned the recurrence of an Enterococcus faecalis infection that they are currently in plans to treat with a new set of phages. (The Enterococcus isolate was still susceptible to minocycline, hinting that potential biofilm formation was responsible for failure of antibiotic action.)

Some key points from the Q&A:

Many thanks to Atif Khan and Stephanie Lynch for finding and summarizing this week’s phage news, jobs and community posts, and to Lizzie Richardson for editing the feature article!

I am a Phage Biologist at heart with a strong technical background in Biochemistry, Bioinformatics, Phage Genomics, Microbiology and Molecular Biology. I worked on the role of phage spanins in host lysis for my PhD under the guidance of Dr. Ryland Young at Texas A&M University. I am currently working on understanding the host-phage interactions between Staphylococcus aureus and phage K towards use in phage therapy applications.