This week, Paulina Deptula, a postdoctoral researcher at the University of Copenhagen, shares her experience using Twitter to find both phages for her research and a supportive community ready to help.

Also in this issue: funds for the first Australian phage bank, funds for Proteon Pharma’s fish farm phages, a tool for finding phage promoters, how to store your phages, why we need more than clinical trials to get phage therapy to market, and more!

What’s the path forward when it comes to phage therapy? According to Shawna McCallin of the University Hospital of Geneva and Phages4All, clinical data is the priority, but it won’t be enough.

"The recent bankruptcy of Achaogen, a biotech producing a clinically-proven antimicrobial, is reason to heed caution that proof-of-efficacy is not enough to ensure viable commercialization.”

Read Shawna’s perspective piece here, and chat with her in person next month at Phage Futures EU in Brussels! (Use registration code PD10 for 10% off!) Associate Professor Ruby Lin of the Westmead Institute for Medical Research (last week’s Capsid & Tail guest writer! has been awarded a grant from BGI Australia to build Australia’s first “phage biobank”! The phage bank will give Australian researchers access to a range of high-quality phages, and could eventually support development of personalized phage therapy in Australia.

Polish company Proteon Pharmaceuticals has been awarded a 2.9 million Euro grant from the European Regional Development Fund to develop phages to fight bacterial infections in fish farming (aquaculture). The grant will help Proteon improve and automate its phage selection process.

What’s the hardest part of phage genome annotation? According to Marta Sampaio and colleagues at the University of Minho, it’s finding phage promoters. Here’s a new tool they developed, PhagePromoter, to help you find them.

The journal Viruses will be awarding two travel awards for Postdoctoral Researchers and PhD students. Each award will consist of 800 Swiss Francs for travel to a virology conference in 2020. Apply here by Oct. 31, 2019!

To help you find a phage conference to spend this on, check out Phage Directory’s Events page!

The Aylward lab at Virginia Tech is seeking a post-doctoral researcher interested in the evolution and genomics of DNA viruses. The researcher will have the opportunity to work in several areas of ongoing research in the laboratory, including the isolation and genomic analysis of bacteriophage and other DNA viruses, cultivation of diverse hosts, analysis of evolutionary relationships and genomic repertoires of different viral groups groups, and the development of bioinformatic methods for genomic and evolutionary analyses.
Last day: September 13, 2019
Academic Post Doc MicrobiomePathogen exclusion

We are looking for an enthusiastic, dedicated postdoctoral fellow with a strong interest in multi-species molecular microbiology to contribute to our ongoing research on colonization resistance in zebrafish. The project aims at characterizing key determinants of microbiota-based resistance to infection using bacterial genetics, fish immunology, genomics, quantitative analysis of bacterial dynamics and imaging. We expect this project to provide insights into the molecular events underlying pathogen exclusion in a controlled multispecies in vivo context.

[Note from Phage Directory: Not a phage-specific position, but we think phage people could bring a lot to this project!]

Any advice on how to store phages/ viruses? I know there are quite a few methods for long-time storage but I’d like to hear your advice. Thanks!
😀 — @LeptihnLab

A few of the answers:

“Easiest way that our lab uses is to make a high titre lysate. You can clean this via ultra-centrifugation into SM buffer, and store long term at 4C. Option to add 0.1 volume chloroform if concerned about sterility. Most phages will keep for decades using this approach […] See our methods paper on this” — @JeremyJBarr

“Will depend on phage and phage-host system. -80 glycerol stocks of phage - needs testing for phage. Or -80 stock of cells that are infected .Or in SM buffer @ 4 if above dont work .Some phage are sensitive to this as well. Can ad CHCl3 to lystates for storage -check CHCl3 first!” — @milja001

“One thing we do is use a modified version of Graham Hatfull’s (@GHatfull) approach for BRED where we extract the genome with phenol chloroform. Can be used later to electroporate back into the host if the phage is unstable. Works good for med genomes <90kbp” — @Phage4Lyfe

Check the tweet thread for more replies as they come in!

Dear phage community,
I’ve created a What’s App group for scientists who work on phage and AMR, to gather them, benefit and share experience, knowledge, and research of phage worldwide. Please join and share the link (https://chat.whatsapp.com/F4gwFkwvHuxLXLuDtGGqLQ) if you like!

I received my PhD in biotechnology at the Department of Food and Nutrition, University of Helsinki in 2017. During my PhD, I focused on biosynthesis of vitamin B12 by Propionibacterium freudenreichii and studied different aspects of the bacterium itself. It is then that we realised P. freudenreichii has a strikingly diverse array of restriction-modification systems, which gradually led to my interest in Propionibacterium phages. I am currently a postdoctoral researcher at the Department of Food Science, University of Copenhagen. My current project is focusing on analysis of defence systems in P. freudenreichii.

Non-emergency phage requests are important too

A great majority of you have probably seen the multiple tweets from @PhageDirectory calling on the phage community to share phages for individual patients with superbug infections. This seems to be the typical activity for Phage Directory: joining efforts of phage researchers in attempts to save lives hanging by a thread. While this and also sending phage alerts directly to its subscribers may easily be the most important role of Phage Directory, it is not the only one.

As stated in their mission, Phage Directory aims to support phage research, phage therapy and phage use in agriculture, the food industry, and veterinary medicine. My personal experience was that Phage Directory created a community on Twitter which responds as widely and quickly to non-emergency requests as to the cries for help.

For me it all started on June 1st, when I saw a re-tweet of Mya Breitbart’s (@virome_girl) tweet looking for phages infecting Vibrio natrigens. What I found unusual was her remark that she was looking for them for research purposes rather than therapy.

This did not seem to matter to the phage community: the tweet was quickly re-tweeted and commented on with offers of different phages or advice on whom to contact. I then thought to myself: could this work for me as well?

New to the phage field, and not studying pathogens

I only recently moved from studying vitamin B12 production capabilities of Propionibacterium freudenreichii to studying its defence mechanisms, therefore I have no experience in phage studies and no publications to show for it.

In addition, P. freudenreichii is not a pathogen, but rather a probiotic candidate commonly used as secondary starter in Swiss-type cheese production. So far, very little is known about the phages attacking it, or the defence systems it employs to stave them off. But it did not matter that I wasn’t studying a pathogen.

My comment to one of the re-tweets got an almost instant comment from the amazing Professor Steffanie Strathdee (@chngin_the_wrld), followed by a re-tweet from Jessica Sacher (@phagedirectory) as well as an offer to post my request on Phage Directory’s Community page and in Capsid and Tail. 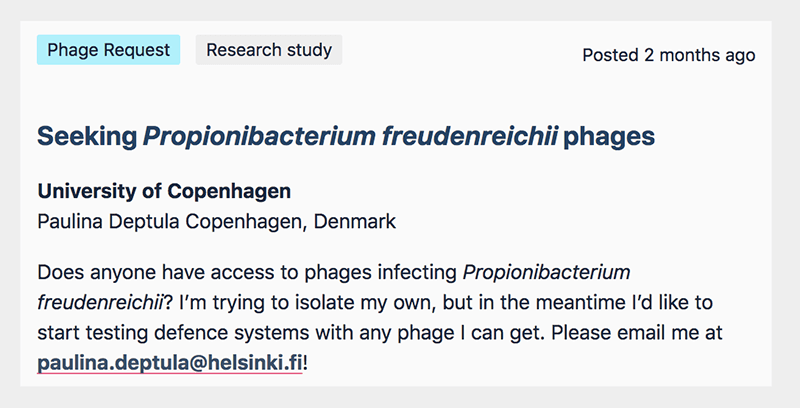 Connecting with researchers who could help

Within a few days, I was in touch with four authors who previously worked with P. freudenreichii phages, including Professors Hatfull (@GHatfull) and Modlin, as well as Dr. Marinelli (@DrLJ_Marinelli) and Dr. Brown.

As a result, I was left with a lot of solid advice on how to work with my host, and a promise of being sent P. freudenreichii phages as soon as possible.

All it took was a comment on a tweet, and suddenly I found myself a part of this phantastic community, where I try to re-tweet and like tweets as much as possible, especially if I am unable to help in any other way. With my promised phages arriving soon and me being able to do some solid research, I may even start to feel like I deserve to be here.

I received my PhD in biotechnology at the Department of Food and Nutrition, University of Helsinki in 2017. During my PhD, I focused on biosynthesis of vitamin B12 by Propionibacterium freudenreichii and studied different aspects of the bacterium itself. It is then that we realised P. freudenreichii has a strikingly diverse array of restriction-modification systems, which gradually led to my interest in Propionibacterium phages. I am currently a postdoctoral researcher at the Department of Food Science, University of Copenhagen. My current project is focusing on analysis of defence systems in P. freudenreichii.

To cite this, please use:
Deptula, P. (2019). Finding a phage community on Twitter. Capsid & Tail, (41). Retrieved from https://phage.directory/capsid/finding-phage-community
BibTeX citation:
@article{finding-phage-community2019,}
RSS Feed
All diagrams and text in this issue of Capsid & Tail is licensed under Creative Commons Attribution CC-BY 4.0, unless otherwise noted.