This week, Colin Buttimer and colleagues from APC Microbiome in Ireland and the University of Galati in Romania share their inspiring experience organizing and teaching Romania’s first phage summer school. Because of their success, a food safety research group in Romania will now be pursuing its own line of phage research!

Also in this issue: two urgent phage hunts, volunteer labs from 11 countries lend a hand in 24 h, BiomX builds its own phage-making facility, an interview with Betty Kutter, phage resistance (or not) in plant experiments, workshops in Tbilisi and Tanzania, how to get phages out of liquid, and more!

We’ve already sent out two emergency phage alerts this week! If you can help, we’re looking for Acinetobacter baumannii (patient in India) and Pseudomonas aeruginosa (patient in Australia). Please email staff@phage.directory ASAP if you can send phages or receive the patient’s strain to test your phages.

Many, many thanks to the 11 labs (from 11 countries!) who’ve offered to help so far! We’re incredibly impressed with the phage community right now!

BiomX, a phage therapy company in Israel, just announced the completion of its very own phage manufacturing facility! The facility will support clinical manufacturing of BiomX’s candidate phage products, and could expand to support commercial manufacturing needs in the future.

This is a fantastic, endearing, in-depth interview with Betty Kutter, “The First Lady of Phage Research”! Martha Clokie asks the questions, and Betty talks about her life as a phage scientist, how she started out, where her career took her, being a women in science in the 70s, the “sign from the universe” that made her stick with phages, and so much more. A must-read!

Catherine Hernandez and Britt Koskella of UC Berkeley have shown that they do not observe Pseudomonas syringae phage resistance in planta, no matter what they try, even though they see it in vitro. Also, phage-resistant mutants didn’t have a fitness advantage in the presence of phage in planta, even though they did in vitro.

Phage resistancePlantsIn vitro vs. In vivo

Microbes and their Viruses 2019 is an upcoming conference hosted at the Eliava Institute in Tbilisi, Georgia Sept. 22-27, 2019. Register until Sept. 1!

The Bio-Behavioral Research Operation of Leidos is currently looking for a Research Assistant to support biological research in support of the Biological Defense Research Directorate (BDRD) at the Naval Medical Research Center (NMRC) in Frederick, MD. The BDRD within NMRC facilitates biological research for the rapid detection of infectious diseases of global importance and the enhancement of global disease surveillance for early pathogen detection and response.

Question:
Hello phage people, does anyone have an improved method to physically remove #phages from liquid broth? Thank you! — @PetrovicFabijan

A subset of the answers to date:

Check the tweet thread for more answers as they come in!

Have you checked out The Phage Page on Facebook? Run by Prof. Gail Christie of Virginia Commonwealth University, this page is a fantastic place to find phage news, research and commentary. We get lots of our “What’s New” articles from Gail’s fantastically-curated page! This week, there’s been an especially large number of news items posted!

Professor at the Faculty of Food Science and Engineering from the Dunarea de Jos University of Galati, Romania, where she teaches general microbiology and rapid methods and automation in food microbiology. She coordinates the food microbiology group of the faculty and focuses on research related to food safety issues, including detection of pathogens in food, biofilm formation, the survival of pathogens under alternative technologies and the control of Listeria monocytogenes.

Lecturer at the Faculty of Food Science and Engineering of Dunarea de Jos University of Galati, Romania, where she teaches on the topic of genetically modified foods and whose research interests specialize in molecular biology and bioinformatics.

The beginning of a new phage summer school

PhageUGAL is neither a new phage nor a new product for phage therapy, but the name of a summer school held for the first time this year (2019) in Galati, Romania.

This event was organised by the Faculty of Food Science and Engineering from the “Dunarea de Jos” University of Galati (UGAL) in collaboration with APC Microbiome Ireland, a Science Foundation Ireland (SFI) funded research centre based in University College Cork in Cork City, Ireland.

The idea of this summer school first started with the desire of Andrei Sorin Bolocan (a former PhD of UGAL) to share his acquired knowledge on phage research gained at APC Microbiome Ireland with his home country.

After contacting his former PhD supervisor Prof. Anca Ioana Nicolau to enquire if she would be interested in holding a summer school about phage at UGAL and receiving her positive interest, the PhageUGAL initiative started to become a concrete possibility.

Prof. Anca Ioana Nicolau’s research interest is especially focused on the investigation of alternative strategies for the control of problematic bacteria relating to food products, and for this reason she was delighted at the opportunity to partner with her former PhD student (Andrei) to host such an event.

The PhageUGAL summer school was organized with the overall aim of promoting the exchange of expertise between international universities and the incorporation of phage research methods into the research activity of UGAL. As phage research is becoming an increasingly relevant area due to the rising reports of antibiotic-resistant bacteria on a global scale, promoting this summer school represents an important first step towards the development of a new relevant research area in UGAL to help tackle the problem.

The inaugural event: an academic triathlon!

Starting the 16th and ending on the 19th of July, the event was an academic triathlon. The summer school covered laboratory practicals for isolation and propagation of phages, extraction of their genomic DNA and its examination by restriction digestion profiles, as well as bioinformatic workshops for phage genome annotation and GenBank submission plus short lectures with topics ranging from phage therapy to the global state of phage research. 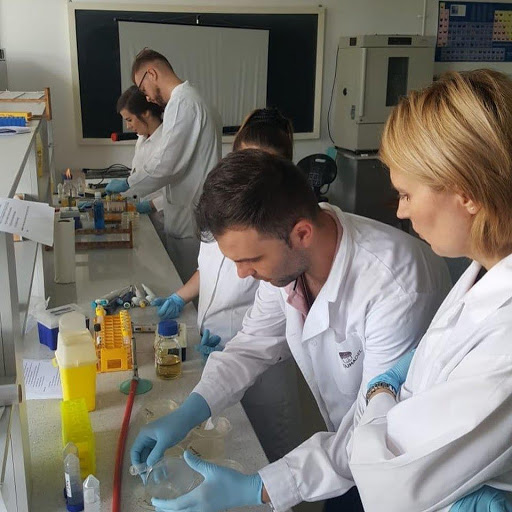 Andrei, Joan and Colin even went on a proper “phage hunt”, visiting several locations around Romania to collect various promising samples for the isolation of new phages. However, despite the long “hunt”, one of the best sources of phage turned out to be Andrei’s chicken coop at his home village! 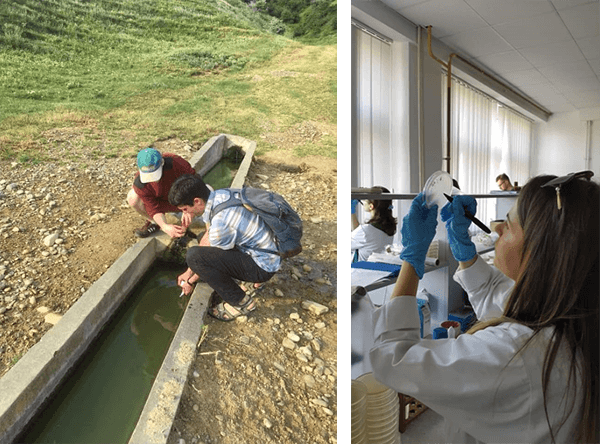 Reflecting on PhageUGAL’s success: new phages and a new line of research

The success of the event would not have been possible without the effort of the PhageUGAL team, who gathered the necessary materials for lectures, workshops and practicals in the days prior to the summer school starting.

Overall, both organizers and participants of PhageUGAL were very pleased with the outcome of the summer school. The organizers believe they may have isolated some of the first phages within the city of Galati, if not UGAL. The participants of the summer school plan to use their newly gained research knowledge and phages to start a new line of research toward the control of bacteria in the food industry. They hope to prepare a publication of their results from PhageUGAL in the coming months.

Given the incredible success of the event, the organizers hope to repeat the PhageUGAL experience next year, and they would like to invite students from other universities and other phage researchers willing to gather together to share their expertise (planning for September 2020).

If you are interested in taking part in the next edition of PhageUGAL please keep tabs on us on LinkedIn and don’t be shy to get in touch.

Professor at the Faculty of Food Science and Engineering from the Dunarea de Jos University of Galati, Romania, where she teaches general microbiology and rapid methods and automation in food microbiology. She coordinates the food microbiology group of the faculty and focuses on research related to food safety issues, including detection of pathogens in food, biofilm formation, the survival of pathogens under alternative technologies and the control of Listeria monocytogenes.

Lecturer at the Faculty of Food Science and Engineering of Dunarea de Jos University of Galati, Romania, where she teaches on the topic of genetically modified foods and whose research interests specialize in molecular biology and bioinformatics.