Creating a searchable directory of phages

We’re excited to share a sneak-peek into our progress toward creating a global phage catalogue and search tool!

US biotech company Intralytix was just awarded a multimillion dollar grant from NIAID to perform a phase 1/2a clinicial trial to assess safety and efficacy of phage therapy against Shigella.

Artem Isaev (Skolkovo Institute of Science and Technology, Russia) and colleagues have published an article in Nucleic Acids Research on how the T7 phage DNA mimic protein Ocr inhibits the host BREX defense system. Ocr, which had been previously shown to protect against type I R-M systems, associates with methyltransferase BrxX and blocks methylation as well as exclusion of external phage DNA. Paper | Press release.

Katherine Wetzel (University of Pittsburgh) and colleagues recently published their work on protein-mediated and RNA-based origins of replication of extrachromosomal mycobacterial prophages in mBio. The study highlights the diversity of lysogeny maintenance systems and describes a set of phage-based plasmids with varying features, such as copy number and compatibility, that opens new avenues for actinobacterial genetics.

Flavia Squeglia (National Research Council of Italy) and colleagues published a paper in Structure that describes a new structural and functional study of a Klebsiella phage tailspike protein with capsular polysaccharide depolymerase activity. This study points to new mechanistic insights into capsular degradation by Klebsiella phages.

The French Phage Network (Phages.fr) has published its annual conference report, which summarizes what was discussed at the 5th annual conference, which took place in Grenoble, France, in October 2019. This meeting attracted about 100 participants from academia, hospitals and industry from France and beyond.

Dr. Hany Anany of Agri-Food Canada was interviewed in this piece on phage use in agriculture. He gives an overview of how phages are currently used in the global food industry, how phages are seen by Health Canada, and how phages could be adopted throughout an integrated food production system.

Congratulations to Cesar de la Fuente, one of our early Phage Directory community members (check out his impressive collection of phages!), who was just awarded the 2020 ACS Infectious Diseases Young Investigator Award.

Would you be interested in collaborating on a grant fellowship application? I plan to apply for the EDCTP-TMA2020CDF - Career Development Fellowships on poverty-related diseases particularly evaluating the role of phage therapy in diarrhoeal infections with particular emphasis on E. coli. This will require a European partner to collaborate on this project.

If you would be interested in collaborating on this project please freely reach me via email eennadi@gmail.com.

We are applying for NORHED II grants and we wish to actualize the Eastern Africa phage research consortium aimed at establishing/upgrading a lab for in-depth characterization of phages, establishing a phage bank, and developing regional policies for phage applications. I am spearheading a proposal on phages against zoonotic pathogens from animal production systems.

We plan to have Makerere University as the lead applicant for the Southern partners with others including someone from Ethiopia, Tanzania and Institute of primate research in Kenya. We must have a Norwegian collaborator. Establishing linkages with biological product companies for production at commercial scale is also important.

We’ve heard from many of you that you’re missing out on hearing about each other’s phage work! So we’re putting together a plan for a series of virtual phage events.

Let us know your topic suggestions, nominate a speaker (maybe yourself!), and share virtual event tips in our Slack group: https://phage.directory/slack.

We are excited to announce and share with you the forthcoming talk of the CEO and founder of Aquatic Biologicals, Dr. Pantelis Katharios, who is going to give a webinar through #EAStalk on “Phage therapy as an alternative treatment in aquaculture. Applications in fish hatcheries”. If you are interested in getting further insights about bacteriophages and the great potential of phage therapy, make sure you mark your calendars for 26th May at 14.00 CET/Brussels time.

In these difficult times of pandemic lockdowns and quarantine, we bring you a series of discussions called “All About Phage Therapy”. For the first discussion, senior microbiologist Prof. Sanjay Chhibber from Panjab University will be joining us on Facebook Live on Sunday, 10th May at 11 am Indian Standard Time. Join at https://facebook.com/VitalisPhageTherapy.

Creating a searchable directory of phages

Jan Zheng is a co-founder of Phage Directory and has a Master of Human-Computer Interaction degree from Carnegie Mellon University, and a computer science and psychology background from UMBC.

For Phage Directory, he takes care of the product design, engineering, and business / operations aspects.

We’re excited to share a sneak-peek into our progress toward creating a global phage catalogue and search tool! At the start of 2020, we laid out our goals for helping the phage community manage and mine its phage data. Since then, we’ve been working hard to build a comprehensive, searchable directory of phages that can streamline access to phages and phage data.

Collaborating with the phage community

Over the past few months, we’ve started to collaborate with labs and phage collections around the world to establish a schema, which helps us understand how each collection manages the data around their phages (shoutout to BCM Tailor Labs, NCTC, and the Felix d’Herelle Center for sending us your phage metadata so far—thank you!).

Today, we’d like to share an update on how things are going, and to gather feedback from the wider phage community! Since our tool is meant to help phage researchers and professionals quickly access phages and phage data from around the world, we’d like to know what phage attributes matter to you.

Why are we doing this?

We want to make it less cumbersome and time-consuming to work with phages. We want to make it easier to find the right phage for any application or research question, and we want anyone to eventually be able to mine the database to get new phage insights.

By streamlining access to phage data, we hope to take some of the burden off of you, so you don’t have to waste hours looking up phages through reading dozens of papers and writing dozens of emails that take weeks of back and forth. An up-to-date, searchable phage tool that lets you find and reference phages quickly, and lets you order the phage from a reputable phage collection to boot, should save many hours of drudgery.

Here’s a mock-up of what we’re envisioning a phage search might look like on the next version of Phage Directory. Many details still need to be worked out, and a lot of that will depend on the feedback we get from community members. How can we make our database and interface maximally useful for the phage community? 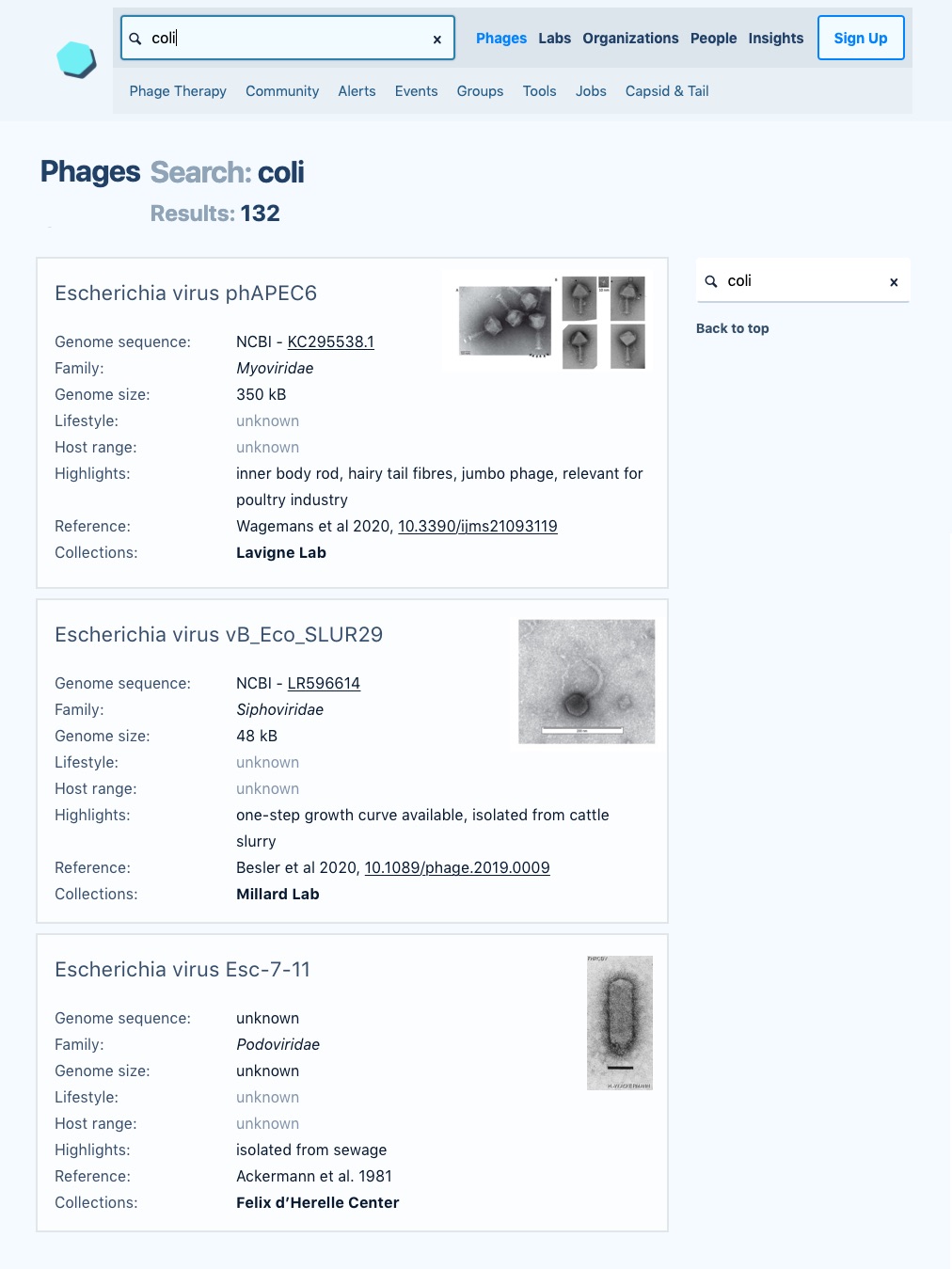 This wireframe shows an example of what we’re envisioning for the next version of Phage Directory, where we’ll be able to support searching for phages across labs and phage collections around the world using a single system. (High-resolution version.)

Building the back-end: a structured database that accepts data from any collection

To build a universal search system for phages, we need to establish a way to place each phage collection’s data side-by-side and match up one collection’s attributes to the equivalent collected by another. Because although many collections collect overlapping data, each collection/organization is driven by a different mission, and thus cares about slightly different aspects of a phage. And even when the same attribute is collected by two different collections, it’s almost certain that each will have its own name for that attribute.

For example, a piece of information like “Isolation Source” could go by many different names, like “Original source”, “Isolation”, “Source (type of sample)” or “Discovery notes”. These kinds of differences makes it really hard to make a universal phage search tool user-friendly.

While we could build a rudimentary text-parsing system to try to tie data together, we decided to create a schema, or dictionary, that defines all the types of data that could be useful to phage research, phage therapy and other applications. Then, by mapping each collection’s list of attributes to this schema, we’ll essentially be able to translate the terms into one language. In the end, a single search term will “speak the language” of many different collections, and will bring back the relevant search results.

After combing through the metadata for several phage collections, we’ve created the beginning of our schema. We’ve divided the list into a few major categories, and given a bit of insight into what fits into each:

We’d love your input on what we’re collecting

We want to ensure that when we make our phage search tool publicly available, that it is actually useful for people. So we’d like to know:

To share your answers, please join our Slack group, where we’ve set up a channel called #phage-metadata just for this discussion. Or, you can always email us at staff@phage.directory.

For those of you in a position to share your lab or organization’s phage metadata with us, we really want to hear from you!

Send us an email at staff@phage.directory, and we’ll invite you to complete the phage attribute mapping exercise we’ve set up.

Rohit Kongari helped us produce this week’s article by helping us source and write the What’s New and Jobs sections. Thanks Rohit!!

Jan Zheng is a co-founder of Phage Directory and has a Master of Human-Computer Interaction degree from Carnegie Mellon University, and a computer science and psychology background from UMBC.

For Phage Directory, he takes care of the product design, engineering, and business / operations aspects.

To cite this, please use:
Zheng, J., & Sacher, J. (2020). Creating a searchable directory of phages. Capsid & Tail, (74). Retrieved from https://phage.directory/capsid/phage-catalogue
BibTeX citation:
@article{phage-catalogue2020,}
RSS Feed
All diagrams and text in this issue of Capsid & Tail is licensed under Creative Commons Attribution CC-BY 4.0, unless otherwise noted.