Dr. Ritah Nakayinga attended the 4th Phages for Global Health workshop in Tanzania this year. This week she shares her experience at the workshop, its impact on her research, and the importance of phage training like this in East Africa.

Need help with phage manufacturing, and looking for an outsourcing partner? JAFRAL manufactures phages to the highest quality and purity, and develops manufacturing processes and analytical methods for various phage types and phage applications.

JAFRAL is the world’s only CMO/CRO that focuses primarily on production of non-GMP and GMP phages.

Last month, Cellexus installed a Dual CellMaker system for FixedPhage, who will use this system to produce phages designed to protect flowers, so people can enjoy longer lasting bouquets. To find out how the CellMaker can improve your phage amplification, get in touch with the team at Cellexus.

Hans Gerstmans (Ghent University, Belgium) and colleagues published a new paper in Science Advances on a VersaTile-driven platform for rapid hit-to-lead development of engineered lysins. Stay tuned; next week’s feature article will be a behind-the-paper on this one, written by senior author Yves Briers.

Jean-Paul Pirnay (Queen Astrid Military Hospital, Belgium) lays out a vision for what personalized phage therapy might look like in the year 2035. His vision coincidentally also happens to lay out much of Phage Directory’s own roadmap!

David Olivenza (Universidad de Sevilla, Spain) and colleagues published a new paper in Environmental Microbiology on a fascinating new epigenetic system that can detect a wide range of phages and identify the type of receptor they recognize.

Shannon Slattery (University of Limerick, Ireland) and colleagues published a new paper in Scientific Reports describing the isolation of a Proteus mirabilis strain from wastewater harbouring an integrative conjugative element (ICE) containing a novel phage defense mechanism. Their findings suggest that ICE may be present in the environment without apparent selective pressures, and may improve bacterial survival in municipal wastewater.

Ahmed Sofy (Al-Azhar University, Egypt) and colleagues published a new paper in Foods on their use of a polyvalent phage to successfully control coagulase-negative Staphylococcus strains (including biofilm dispersal) in a food setting.

All Jobs Post a job
LecturerPhage Therapy
The Faculty of Biology and Medicine and the Lausanne University Hospital (Lausanne, Switzerland) are hiring a senior lecturer in the field of phage therapy / bacteriophages.
Fermentation industryLactic acid bacteriaScientist
A Madison, Wisconsin company is hiring a scientist (culture development) for research into lactic acid bacteria in food fermentation. An understanding of phage management is essential.

Save the date for PHAVES!

It’s almost time for PHAVES: Phage Directory Virtual Event Series! (The acronym was too good; how could we not?)

And we’re keeping signups open on a rolling basis, so go ahead and sign up if you’d like to present this summer. Or you can nominate your phaves for PHAVES, like some have already done. (Do that by email at events@phage.directory). See you on Zoom soon!

Many thanks to Stephanie Lynch from the Helbig Lab at La Trobe University for helping us organize this series! Also it’s her birthday this week! Happy birthday Stephanie!

Got phage protocols, or wish you did? The community can probably help!

Here’s an example from Twitter: “Hey, I’m working on phages and need to extract phage dna for characterization. Would you recommend Zymo kit for extraction? If not, which kit would work for me?” —@mart_1982 (Check the thread for responses).

My research focuses on developing cocktail phages for plant diseases in Uganda. Phage research is new in Uganda and it would be interesting to form collaborations for expertise, funding, research exchange with similar researchers world wide.

The first time I ever heard of a phage quote was at the 4th Phages for Global Health (PGH) phage laboratory training workshop:

“Give a woman or man a phage and you may treat one particular infection once. Teach a woman or man how to isolate phages and you will remove multiple infections from multiple pathogens” - PGH Team.

This quote speaks volumes about the need for phage knowledge transfer for better health for a global tomorrow.

Bacteriophage training is a rare skillset in academic and research spheres yet a plethora of bacteria-associated infections contribute vastly to the disease burden in East Africa (E.A). Since its inception in 2017, PGH has trained several scientists in phage biology, with the aim of strengthening phage laboratory capacity in Africa.

In January 2020, I was selected among twenty-five to participate in the 4th phage laboratory training workshop that was delivered for two weeks at Muhimbili University of Health and Allied Sciences (MUHAS), Tanzania, with all expenses covered. The participants came from Uganda, Kenya, Tanzania and Rwanda. 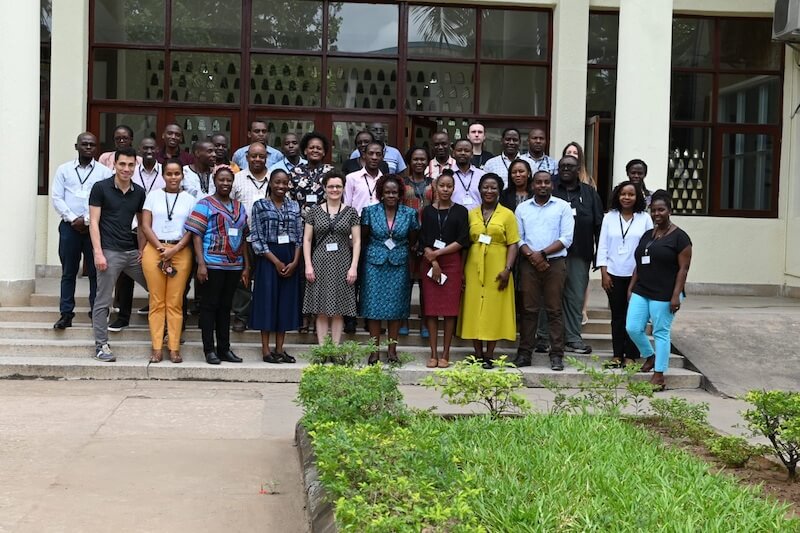 Although my academic training focused largely on studying insect viruses, so my knowledge of phage biology and their application was limited, I have a strong passion for phages because of the growing paucity of viable technologies against resistant bacterial infections. My current research is funded by IDRC (International Development Research Centre) and focuses on identifying lytic Xanthomonas campestris pv. musacearum (Xcm) phages and creating cocktails to control and manage banana bacterial wilt disease of the cooking banana, a staple food crop in Uganda and East Africa.

The training was delivered by both didactic and hands-on training methods. The presentations covered topics including but not limited to phage biology, ecology, therapeutics, and bioinformatics. Attending the presentations was the easiest part of the training and I enjoyed listening to phage history as well as the current phage research trends globally. The trainers displayed excellent presentation skills and relayed knowledge in a simplistic style. As such I have incorporated phage biology into the teaching curriculum of undergraduate microbiology classes at Kyambogo University.

During the early sessions, the participants went on a phage hunt collecting soil and sewage samples around a sewage plant. This was quite an interesting expedition because I learned how to look for phages in sewage sites. Indeed the sites that displayed high concentrations of bubbles/froth harboured more phages, as we later found out in the laboratory. This reminded me of the workshop’s phage ecology presentation, where it was emphasized how these microorganisms live close to their target. The laboratory sessions were rigorous, rich in diverse techniques, hands-on and some were advanced. The techniques covered included but were not limited to isolation, morphology, molecular characterization and biofilm experiments. To my delight was the sight of a portable technology that sequenced phage genomes that were collected and isolated during the training. These were Pseudomonas and E. coli phages. If this technology is made accessible then molecular characterization would be made much more possible in resource-limited areas.

Throughout the training, we formed working friendships which would later form into research collaborations. For instance, a research collaboration was formed for research into bacteria-associated pneumonia phages between participants Dr. Eric Omwenga (Kenya, P.I), Dr. Deborah C. Kajeguka (Tanzania) and myself (Uganda). We submitted an application to the Royal Society in February 2020. The PGH team has gone ahead to create a Whatsapp phage platform for E.A 2020 phage participants for continued future partnerships and collaborations as well as promoting phage research in Africa.

I will amend an old quote and modify it to this:

The training workshop not only made us work hard but we also played hard at the beautiful Mbudya island, Indian ocean. We swam in its warm blue waters and had great food throughout the workshop. All this created opportunities to connect and create research friendships among us as well as with the great PGH minds. My heartfelt gratitude goes to the trainers, Dr. Tobi Nagel (Founder, Phages for Global Health, USA), Prof. Matha Clokie (University of Leicester, UK), Dr. Janet Nale (University of Leicester, UK), Dr. Ben Chan (Yale University, USA), and Dr. Shawna McCallin (Hopitaux Universitaires de Geneve, Switzerland), and to our host staff from MUHAS. The experience was very rewarding, improved my confidence at executing my project and was a great learning curve.

While the developed world has advanced in phage research, Africa lags behind partly due to low laboratory capacity and skillset in phage and limited knowledge on their potential and importance in public health and agriculture. As such, there is an urgent need for phage trainings to transform Africa so as to contribute to global economic progress. Through its workshops, Phages for Global Health is making impressive and encouraging progress in this area.

Read more about Phages for Global Health, and consider donating money, expertise or supplies, and subscribing to their newsletter!

My research focuses on developing cocktail phages for plant diseases in Uganda. Phage research is new in Uganda and it would be interesting to form collaborations for expertise, funding, research exchange with similar researchers world wide.