This week, we’re highlighting a paper published by Shelley Gibson and colleagues at Baylor College of Medicine and the VA Medical Center in Houston, Texas. They’ve constructed and characterized phage libraries against three pathogens, and made them available for phage therapy.

Felix Biotechnology is a new phage company using phages to target antibiotic resistant bacteria based on their mechanism of antibiotic resistance (working with Yale University). They just won this year’s Falling Walls Venture competition in Berlin, and have been named Science Startup of the Year! (Watch their 5-min pitch here)

Karen Weynberg and Paul Jaschke of the University of Queensland and Macquarie University in Australia have published a perspective on how high-throughput phage engineering could be accomplished using biofoundries, core facilities that enable automated design-build-test-learn cycles to rapidly produce genetically reprogrammed organisms.

Gabriel Almeida (University of Jyvaskyla, Finland) and colleagues have published a paper showing that phages of the fish pathogen Flavobacterium columnare bind to mucus, providing new support for the ‘bacteriophage adherence to mucus’ (BAM) model. What’s more, they saw that mucus increased bacterial virulence and phage susceptibility, suggesting an interesting ecological trade-off. And as a useful side-note, this study led to a solution for a decades-long struggle to propagate F. columnare phages in the lab - just add mucus!

Ushanandini Mohanraj (University of Helsinki) and colleagues have published a paper showing a screen they’ve developed to identify hypothetical phage proteins with antibacterial activity. They’ve used it to identify four Yersinia phage proteins that are toxic to E. coli.

Bacteriophages often carry auxiliary metabolic genes that are used by the phage to augment host metabolism to maximise phage replication. These genes often overcome metabolic bottlenecks encountered by their bacterial hosts and point towards the most important limiting factor in an ecosystem. Amazingly they have not been examined in the rainforest and such genes may be of key importance to understand ecosystem function from a bottom up perspective.

This project will use both culture-based and culture-independent methods to study bacteriophages from Belum rainforest and from the Amazon that are associated with hallmark plant species. The project will specifically investigate the viral communities in soil surrounding different plant species.

This project is aimed at evaluating the use of bacteriophage to treat Staphyloccocus aureus colonization and/or disease in order to better combat multi-antibiotic-resistant bacterial pathogens. A major goal of this project is to establish and utilize animal models to investigate the potential of phage treatment against S. aureus to decolonize the upper respiratory tract and/or to treat S. aureus infections. However, other aspects will delve into aspects of the genetics of bacteriophage that are relevant to their deployment in these contexts. These include genetic mechanisms of bacterial resistance to phage and mechanisms of phage adaptation to infect different or new hosts.

The PHE Culture Collections is a Biological Resource Centre that provides a service maintaining and supplying strains of cultured cells and microorganisms for public health research. It is structured as a fully integrated service, underpinning science with significant scientific, manufacturing and business activities and operates from laboratories across the PHE.

The successful post holder will be a member of the laboratory operations team and duties will including: the propagation and quality control of bacteriophage and the cultivation, freeze drying and banking of bacterial strains within the National Collection of Type Cultures (NCTC); replenishment and upkeep of inventory and test records; and also maintaining the electronic database.

We have been attempting to get the titre of our phage but don’t seem to know where we are getting it wrong. What’s your preferred protocol? We use the double-layer plaque assay and a McFarlands standard 1.0 for the culture. If you would love to share your protocol you may wish to email me at eennadi@gmail.com.

In this week’s feature article, we’re highlighting a paper recently published by Shelley Gibson and colleagues at Baylor College of Medicine and the Michael E. DeBakey VA Medical Center in Houston, Texas.

Through academic-clinical collaboration, they’ve constructed and characterized phage libraries against three pathogens, and have made them available for phage therapy.

This effort serves as a great example of systematic phage characterization, data collection and presentation, which is increasingly needed in the phage field.

Which pathogens do the phage libraries target?

How were the phages characterized?

Which strains were used to determine host range?

E. coli phages: coverage of most clinical isolates through cocktails

The E. coli phages the team had in the lab didn’t plaque on ExPEC ST131, their strain type of interest, so they isolated eight phages from environmental samples (avian and canine species are known to harbor ExPEC ST131; they found phages in goose, duck, dog, and chicken feces from parks and farms, as well as from a sewage plant).

A cocktail of three of their eight phages could kill 92% of their 76 clinical isolates. No single phage killed more than 50-55% of the strains.

All phages got to high titres and had varied biological characteristics.

E. cloacae phages: coverage of most clinical isolates without need for cocktails

They tested the phages on clinical isolates from LVAD infections and UTIs. 70% of the strains were killed by all individual phages (cocktails didn’t improve this).

All phages were T4-like and similar to one another.

Four previously described phages (ϕKMV, ϕPA2, ϕPaer4, and ϕE2005-24-39) were shown only to lyse 2-23% of the team’s 64 clinical strains. To broaden their host range, they subjected these phages to a host range expansion technique (also known as the Appelmans protocol, which is used by Eastern European phage researchers).

They tested the host range-expanded phages on their 64 P. aeruginosa clinical isolates, and found that a three-phage cocktail of the new phages could lyse 81% of them. However, many phages killed at too low an efficiency to be useful for therapy, suggesting room for improvement of this library.

The host range-expanded phages had similar growth properties to those of their parental phages.

How were phages analyzed genetically?

Genome sequencing was done for all phages (analysis was done in part through PATRIC, a free comprehensive genome analysis service). Genomes were scanned for virulence factors and antibiotic resistance genes. They scanned against several databases, including:

They also scanned the genomes for evidence of a lysogenic lifestyle (integrases, attachment sites) using:

Did they find any detrimental genes?

Most phages appeared devoid of toxic and lysogenic elements and thus appear safe for phage therapy. One E. coli phage contained a suspected integrase gene, though it could not be induced by mitomycin C.

This group plans to work with their local Veterans Affairs Hospital to have phages available for testing on each patient strain that comes in, during the time it’s being tested for antibiotic resistance. If phages are found active against the isolate, it will be the physician’s choice to use phages, antibiotics or both.

They also plan to keep collecting strains from the urine of all spinal cord injury patients that come into their hospital, and ultimately to create phage libraries that can cover any infection (with any pathogen) that comes in. They’re doing the same at the Baylor-St. Luke’s hospital for all bacterial strains causing LVAD infections.

In terms of biological characterization of the phages the team has already collected, next steps involve identifying their host receptors and testing phages in in vivo studies using animal models of UTIs and LVAD infections.

For now, these phage libraries are available for compassionate use in humans.

Read the main source for this week’s feature, especially to see the figures (and much more data than I’ve described here!). Their discussion section is also particularly worth reading; in it they discuss how they envision phage therapy working in their local centers, and how their phage libraries might optimally be used. 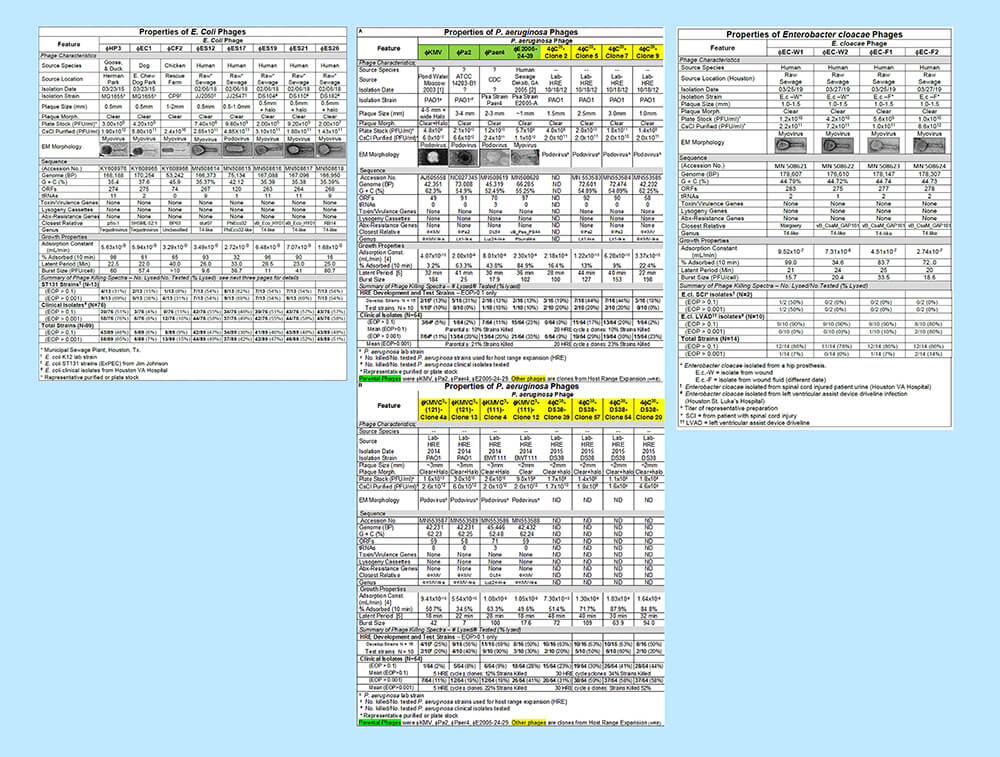 Click to view the full image of the phage characterization charts side by side (large file size). Image adapted from Gibson et al. 2019.

To cite this, please use:
Sacher, J. (2019). Constructing phage libraries for therapy. Capsid & Tail, (53). Retrieved from https://phage.directory/capsid/phage-therapy-libraries
BibTeX citation:
@article{phage-therapy-libraries2019,}
RSS Feed
All diagrams and text in this issue of Capsid & Tail is licensed under Creative Commons Attribution CC-BY 4.0, unless otherwise noted.