This week, Donna May Papa, Assistant Professor at the University of Santo Tomas in Manila, Philippines, tells us about her lab’s journey into phage research, and their plans for the future.

Dr. Saima Aslam of IPATH in San Diego received funding from the Cystic Fibrosis Foundation to initiate and maintain a multicenter clinical cohort of cystic fibrosis patients and lung transplant recipients infected with Burkholderia cepacia complex (BCC) pathogens. Her goal is to develop a BCC-specific phage library, to better understand progression of BCC infection in CF patients, and to treat CF patients in a future clinical trial with these phages. Learn more about IPATH in the July 2020 edition of their quarterly newsletter.

Not much is known about filamentous phages, which chronically infect their hosts and can dramatically affect host physiology, but their genomes are starting to be detected by the hundreds. Jason Shapiro and Catherine Putonti (Loyola University Chicago) published a paper on their discovery of a new group of filamentous phages called UPΦ phages, which they found in hundreds of published genomes.

Liang Li (Lundquist Institute at Harbor-UCLA Medical Center) and colleagues published a new paper in MSystems showing the critical impact of the novel prophage ϕSA169 on MRSA persistence in the bloodstream.

Yoon Hwang of the Naval Medical Research Unit in San Antonio received the Dr. Delores M. Etter Top Scientists and Engineers of the Year Award for his research into the development of a handheld device that uses phages to detect and identify venom in the human body following a bite from a poisonous snake or animal. Dr. Hwang is also developing phage therapy to treat snakebites, by having phages target and neutralize venom components.

Studying phage lambda has brought countless insights to the phage field and beyond. In a new review, Jodi Brewster and Gökhan Tolun (University of Wollongong, Australia) go over key in vitro experiments from the last half-century of research into the lambda recombinase system. They address what we know, what we’re missing, and what the next 50 years might bring.

Interested in how phages could be useful in the COVID-19 battle? Here are a couple of opinions on this: one by Marcin Wojewodzic (Cancer Registry of Norway), published in PHAGE journal, and one by health and science journalist Helen Albert, published in Forbes.

M. R. Madhav, a student at Vellore Institute of Technology in India, and one of our newest Phage Directory volunteers, has a phage blog called Phage Fanatic. Check it out!

All Jobs Post a job
BiotechContract Research OrganizationMicrobiologist
My client, a Northeast US-based CRO, wants to hire a Microbiologist with phage experience for their phage and other contract research programs to provide lab-bench and technical support, especially taking a lead with phage-based programs.

Primary responsibility will be titration of phage in clinical trial specimens, validation and qualification studies. Full-time position with a diverse and productive team taking on research challenges from the biotech & pharmaceutical industries.

Desired candidate will have a good, working knowledge of phage biology. BS or MS in any relevant field, but experience with phage bench techniques such as titration and storage of phages is more important than degree level. Dependent on the candidate’s abilities, the role would include writing of protocols and SOPs. Experience with molecular biology and qPCR is also desirable.

Please contact ben@bbphage.com with your CV and cover letter.

Thanks so much to everyone who joined us for PHAVES earlier this week, where Elyse Stachler talked about her research into combining phages with disinfectants. We had a great time meeting so many of you at the breakout sessions that followed! Her session will be recapped later this month here in Capsid & Tail!

Our next event will be Tuesday, July 21 at the same time, 11 AM Eastern, 5 PM CEST (GMT+2). Piotr Tynecki of SLAVIC AI, the creator of phage.ai, will give a talk entitled “Boosting phage exploration by Artificial Intelligence: what could data science do for your research?” Sign up here at seminars.phage.directory. If you’ve already signed up for the whole series, no action necessary! You’ll get an email closer to the date.

This Sunday, Dr Vinod Kumar CS will share his expertise of 20yrs working w/ #Bacteriophage & #AMR on Ep. 8 of #AllAboutPhageTherapy! His recent studies include #PhageKinetics of #MRSA phages & #Phage as alternative to chlorine to treat wastewater. Tune in 12 Jul 4pm IST.

Since the global antimicrobial resistance crisis has been escalating for the past few decades, the need to search for alternatives to antibiotics in countries such as the Philippines remains to be a pressing concern. Bacteriophages are a promising antibacterial technology, but, studies in the country are still in their infancy, and have been focused mainly on isolation and morphological characterization with a few notes on their potential for therapy in comparison with antibiotics. It is quite unfortunate that even as technology has offered so many tools to aid us in the in-depth identification and characterization of viruses, there is still so little that we know about them. Apart from the lack of funds and phage biologists, other challenges stem from the usual challenges besetting the growth of science and technology in a developing economy. The usual problems that may be easily addressed in developed countries remain a big challenge here.

The search for a predator: the journey of the research

I was really aiming to study bacterial predators, and initially, I was looking into Bdellovibrio. However, one of my professors told me to look into phages and I was instantly drawn to them. Initially, I had no one to help me with my work, but, twenty years later, I am still working on them, despite the limited resources available at my disposal. My collaborations with other phage scientists in other parts of the world have helped a lot in improving my research. I have come to know more about their potential, but there are still many challenges ahead. Let me walk you through the prospects and challenges that I have been encountering so far.

The Philippines is an untapped mine of phage diversity. As a tropical country, phages with very unique properties can be and have been isolated here. Among the most interesting ones is Phage Lu11 (pictured below) which has curly tail fibers, a very unusual characteristic for phages! With a yearly US$500 fund for maintenance and operating costs from my university (and oftentimes a portion of personal money), I had been entrusted to produce groundbreaking research on phages here. The trust and support given to me was enough inspiration to proceed. With the guidance of senior phage mentors outside the country, and other mentors here, me and my students had been able to work on phages that have potential in aquaculture, food industry, and the medical field. Since 2008, 81 students (undergraduate and master’s) have worked on phage research under my supervision. I eventually established the Bacteriophage Ecology, Aquatic, Therapy and Systematics (BEATS) Research Group. Though we do not have our own exclusive lab, we conduct our research in the Pure and Applied Microbiology laboratory in our university’s research building.

To aid in furthering the knowledge and interest in Phage Biology, the group (pictured below) looks into the potential of phages in therapy compared to antibiotics, applications in bio-sanitation, biocontrol and bio-preservation, and we also aim to determine their diversity and role in the ecosystem. Finally, the group plans to establish and maintain the first Bacteriophage Culture Collection in the country. We have faced several government grant rejections in the past, but we are still not deterred because we believe that eventually, our government will realize the potential of phages. 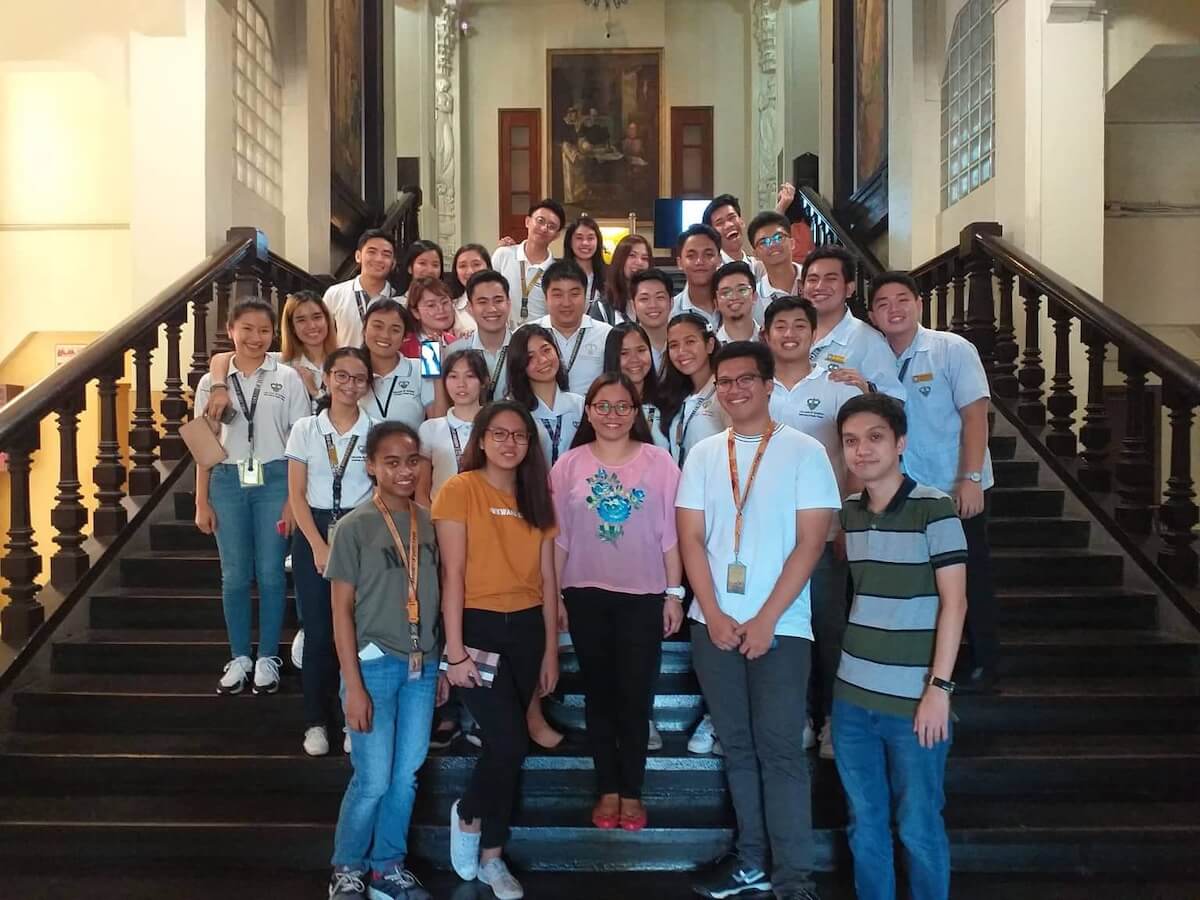 The limited amount of published information on the efficiency and use of phages in our country means that there are many opportunities to conduct a variety of basic and applied research on phages here.

I believe that more studies into the role of phages in the biogeochemical cycles in aquatic environments, phage therapy, taxonomy, systematics and biodiversity of Philippine phages need to be conducted to be able to fully realize the potential and applications of phages from the Philippines. There seems to be a lot that needs to be done, but I am positive that we will be able to get there somehow.

In the Philippines, the red tape associated with a very complicated bureaucracy usually hampers our progress in the laboratory. For example, requests for laboratory supplies usually take up to six months to arrive, which paralyzes the progress of work. There is also a need to properly inform the government and the end users on the safety of phages to improve the trust in using viruses for many applications.

There is no specific regulatory board that approves the application of phages in the Philippines, and they may well be categorized as GMOs, which is not actually the case. Government funds for science have also been channeled toward pandemic research (which is very important at the moment). This will lessen the possibility of obtaining research grants for other fields of study, including those on phages, which we had submitted.

Then, once a phage product may be proven effective, technology transfer is also another challenge, since there are no local companies that are aware of the promise of using phages.

In spite of all these obstacles, I still choose to work on these remarkable entities! All I can say is #challengeaccepted!

Rohit Kongari helped us produce this week’s article by helping us source and write the What’s New section. Thanks Rohit!!

To cite this, please use:
Papa, D. (2020). Laying the groundwork for the next level of phage research in the Philippines. Capsid & Tail, (83). Retrieved from https://phage.directory/capsid/philippines-phage-research
BibTeX citation:
@article{philippines-phage-research2020,}
RSS Feed
All diagrams and text in this issue of Capsid & Tail is licensed under Creative Commons Attribution CC-BY 4.0, unless otherwise noted.