Flipping the turtle back on its flippers: Phage therapy to combat a shell infection in a sea turtle

Remember when Shelley the sea turtle got phage therapy, thanks to the phage community? This week, Stephanie Lynch distills main learnings from the paper and shares her interview with Shelley’s vet, plus a webinar/Q&A that dives deeper! PHAGE is the only peer-reviewed journal dedicated to bacteriophage research and its applications in medicine, agriculture, aquaculture, veterinary applications, animal production, food safety, and food production. Submit today to this exciting and dynamic publication!

New perspectives on the therapeutic role of phages and emerging knowledge on their role in the gut microbiota.

Cell wall deficiency may limit the efficacy of phage therapy.

Save the date for Stephanie Lynch’s PHAVES webinar, which will be our last of the year! It will take place at 4PM Eastern time on Tues, Dec 7 (or 8AM AEST on Wed, Dec 8 if you’re in Australia!). Stephanie will discuss her research into phages and lysins for canine Staphylococcus pseudintermedius infections; more details to come soon! Register for the PHAVES series at https://phaves.phage.directory.

Many of us are excited for the upcoming Viruses of Microbes (VoM) conference finally taking place summer 2022 in Portugal (after being rescheduled from 2020). In collaboration, the International Society for Viruses of Microorganisms (ISVM), Phage Directory, and the organizers of VoM 2022 are excited to announce Season 2 of iVoM, a series of online lectures from prominent researchers studying viruses of microbes. Seven sessions will run from December 2021 to May 2022, in the lead-up to the exciting in-person version of VoM, July 2022.

The first iVoM2 event will be Dec. 8th at 12:00 PM (noon) CET, under the theme "Control on Viral Action: regulation of viral activity by other viruses and mobile genetic elements".

It will feature talks by:

The rest of iVoM Season 2 will take place in 2022 and consist of six additional sessions (#2-7) on the topics of:

Phage Directory’s new structured peer feedback platform, Instill Science, is now live, and the first few requests have been posted and replied to!

Can you help your fellow phage researchers by providing a second set of eyes on their work? If so, check out the active requests. Currently, Marwan M. Saleh, Bharat Jhunjhunwala, Steve Abedon, Stephen Amankwah, Noutin Fernand Michodigni and Jan Zheng are looking for feedback or collaborators, ranging from feedback on a study on phage therapy and a phage book chapter, to help with experiments and tools, to those willing to have a conversation about phage databases.

What does feedback look like? Spend 30 mins reading through and giving your first impressions and overarching thoughts on any given piece of work. Your contributions will be tracked and recognized, and you’ll be helping fellow researchers by sharing your expertise.

Thanks so much to those who have already responded to these requests and are working to provide feedback already: Betty Kutter, Urmi Bajpai, Tobi Nagel, Daniel Schwartz, Katharine Muscat, and Atif Khan! You are all amazing and we are so grateful for your support!

Submit your own request for help!

Interested in contributing a blog post about your phage work (or your phage initiative) to C&T? Check out our Guest Writer Guide!

In keeping with our 4x per year draft submission deadline system, our next deadline is approaching!

Flipping the turtle back on its flippers: Phage therapy to combat a shell infection in a sea turtle A 42-year old loggerhead sea turtle suffered from a septicemic cutaneous ulcerative disease (SCUD) for the past 4 years, over time, the infection became resistant to most antibiotic treatments. Through collaboration between veterinarians and researchers from several universities, phage therapy in combination with antibiotics was administered using multiple routes of application over an 8 month period, leading to a reduction in clinical symptoms.

Here I provide a recap of the recent paper detailing this case: The Use of Bacteriophages and Immunological Monitoring for the Treatment of a Case of Chronic Septicemic Cutaneous Ulcerative Disease in a Loggerhead Sea Turtle Caretta caretta, finishing with a ‘behind the paper’ Q&A with Dr. Whitney Greene, the lead veterinarian on the case!

In 2014, a 42-year old female loggerhead sea turtle was diagnosed with Septicemic Cutaneous Ulcerative Disease (SCUD), a bacterial shell infection of aquatic turtles. Clinical symptoms of SCUD included loss of pigmentation of the shell, lesions and soft spots of the shell. The gram-negative bacterium, Citrobacter freundii, was isolated from the infection sites and displayed multidrug resistance to various treatment options. Antibiotics were administered previously, however, were not favourable as they require consistent dosing and were not effective at clearing the infection. It is also worth noting that the carapace of a sea turtle is made of bone, which is a primary reason why this disease was difficult to treat, as many drugs can’t penetrate bone to therapeutic levels. Therefore, the infection in the sea turtle presented a promising case for compassionate phage therapy.

Phage therapy was chosen as the therapeutic choice for the SCUD infection in the sea turtle as phages continue to increase in titre when the bacterial host is present, reducing the number of repeated doses. Phages were also chosen as they are generally highly specific, only lysing the bacteria of concern, which has been proven in a previous study where phages did not disrupt the normal bacterial communities in the sea turtle gut. This is important as sea turtles rely on their good gut bacteria to extract nutrients from their food.

A total of 10 phages were isolated from raw sewage or wastewater and were mixed together in various combinations as a ‘phage cocktail’ for administration.

A high titre of phage cocktails (10^12 PFU/mL) were administered using multiple formulations and application routes. In addition to phages, dual therapy with numerous antibiotics (oral and subcutaneous) were administered throughout the treatment period. 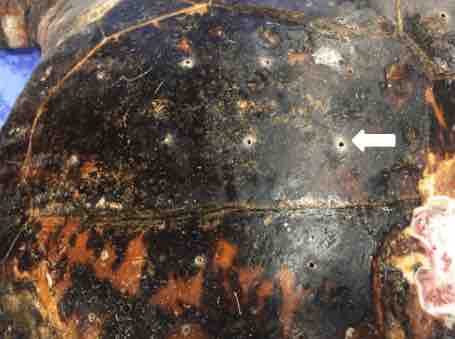 Prior, during and after phage therapy treatment, blood samples were routinely collected to assess blood counts and chemistry, as well as examine immune markers. Photographs of the turtle cell were also recorded periodically. Culture swabs were also collected for bacterial culturing and bacterial susceptibility to antibiotics.

The outcomes of compassionate phage therapy on sea turtle infection The use of compassionate phage therapy showed to improve the clinical signs of SCUD in a 42-year old sea turtle, with no adverse side effects. The dual therapy of phages and antibiotics in combination resulted in a change to the susceptibility patterns of the C. freundii isolates from high multidrug resistance to susceptible. While further work is required, phage therapy represents an effective treatment avenue for MDR infections in sea turtles and aquatic animals.

Behind the paper interview with Dr. Whitney Greene

We ask Dr. Whitney Greene, DVM, MS (veterinarian) some questions from behind the scenes of the paper!

Q1: What was the process from realising you wanted to try phage therapy to administering phages to the sea turtle?

A: I had no experience with bacteriophage therapy prior to this case.  I came into this case after the turtle had already been through treatment for SCUD for four years. Other clinicians had tried virtually every treatment option available but her infection progressed over time despite all treatments.  Her infection started as a region on her carapace the size of a dime and continued to spread and progress despite extensive treatment with antibiotics, surgery, other oral medications, and many topical treatments. Citrobacter was consistently the bacteria that was isolated, but its susceptibility pattern changed over time. Once it became multidrug resistant, we knew we had to think even more outside of the box than we had been and my mentor suggested bacteriophages. I knew nothing about it but found Dr. Steffanie Strathdee out of UC San Diego and she introduced me to a whole network of extremely intelligent phage researchers.  This collaboration was absolutely key to the success of this project.

Q2: What did you learn about the immune response to phages and the consequences for phage therapy from this study?

A: Difficult to answer this as we do not know much about sea turtle immunology and we suspect that Shelley may have an altered immune response. We did lots of different immune assay tests to try and learn more and compare her response to a control. One interesting finding is there was no seroconversion to the phages during the treatment period. This suggests that phage treatment could be continued without antibody interference in effectiveness.

Q3: How is the sea turtle, Shelley, doing now?

Shelley is doing well!  Though I no longer work with her, I periodically receive updates and have not heard of any recurrence of the clinical signs.

Many thanks to Atif Khan and Stephanie Lynch for finding and summarizing this week’s phage news, jobs and community posts!

To cite this, please use:
Lynch, S. (2021). Flipping the turtle back on its flippers: Phage therapy to combat a shell infection in a sea turtle. Capsid & Tail, (154). Retrieved from https://phage.directory/capsid/sea-turtle-gets-phage-therapy
BibTeX citation:
@article{sea-turtle-gets-phage-therapy2021,}
RSS Feed
All diagrams and text in this issue of Capsid & Tail is licensed under Creative Commons Attribution CC-BY 4.0, unless otherwise noted.